This is an attempt at an anti-colonial OSR dungeon crawl.

Long ago, your old friend Blue Oni did a Bad Thing to help you out. Their sacrifice helped the humans look past your monstrous nature and you were able to live in human society comfortably afterwards, though Blue Oni had no choice but to flee and live in the wilderness. Things went well for you for a time until you also became alienated from civilization, and decided to journey to find Blue Oni and make amends. Your Oni or group of Oni outcasts have tracked Blue Oni to an old abandoned structure that is home to various supernatural Yokai who also live outside of human civilization. In playing Sad Oni RPG you will explore this structure, develop relationships with its Yokai inhabitants, confront your own inner demons, and try to make amends with your long lost friend Blue Oni.

In order to download this TTRPG you must purchase it at or above the minimum price of $3 USD. You will get access to the following files:

Support this TTRPG at or above a special price point to receive something exclusive.

These are free copies of the game available for people who are financially burdened, no questions asked.

This game is... particular, I can see the appeal, but I just find it funny to kill monsters and tactically getting an advantage on them. Yes, I became friend with some orcs who didn't wanna die, but mostly I've killed theme and, I mean, why I shouldn't? They killed countless adventurerers before me so why should I feel guilty? Also I find the pretense to "decolonise rpg" stupid, since rpg aren't a product of the colonial era or mindset, all your just saying is that it has a japanese setting, which for me it's a big plus since I'm tired of playing medieval europe, but stop trying to paint it as a battle against whomever, I just want to play rpg and not to think about politics, it's just escapism and I like it that way. Overall if you're looking for non conventional dungeon crawl with a strange japanese inspired setting I recommand it.

If you just want to play an RPG and not think about politics, there are plenty of other options out there. It's quite telling that you decided to comment on this one in particular just to rant about how "stupid" decolonised rpgs are. You also write about how you purposely went against the game mechanics to kill monsters, which again, there are other games you can do this in.

I think this is a marvelous little game and deserves more visibility just for trying something new and different.

A very interesting take on OSR and dungeon crawling. Instead of going into a dungeon to kill monsters, you befriend the monsters as one of their own. 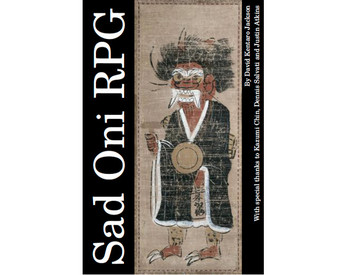